Bears Rebound After Opening Round Loss in Preds Cup Tourney

After an opening round upset by #6 Indy-Summit Monday Night,  the Bears live to play again after winning their first game in the losers bracket and ending #7 Ravenwood’s season.

In a Monday night 4-3 decision in the favor of Indy-Summit, they jumped out to an early lead and the Bears were able to answer each of their goals until a late goal in the 3rd period proved to break the back of the Bears, sending them to continue the chase for the Preds Cup through the loser’s bracket. Scoring for the Mt. Juliet/Wilson Central/Lebanon Hockey Club were Michael Settle, Logan Baskin, and Linden Palmer. Mark Broekhuizen stopped 13 of the 17 shots he faced as goalie.

In Wednesday night’s game against Ravenwood, the Bears attacked early and ended up with a 5-4 victory, including a game winning goal from Linden Palmer with 93 seconds left in the game. Anthony Paponetti had a hat trick, scoring three goals on the night and earning the MVP gold jacket. Nick Redisi had a goal and 2 assists in the effort. Goaltender Michael Dillard got the W, turning away 12 of 16 shots.

The Bears will return to action Monday night as they navigate the loser’s bracket and fight to keep their season alive and play the Fighting Irish of #4 Father Ryan. Puck drop is scheduled for 7:40pm at Centennial Sportsplex. Admission is free and fans are encouraged to come cheer for the Bears.

The Bears celebrate after their 5-4 win over Ravenwood Wednesday night        Photo by: Mr. Brady Palmer 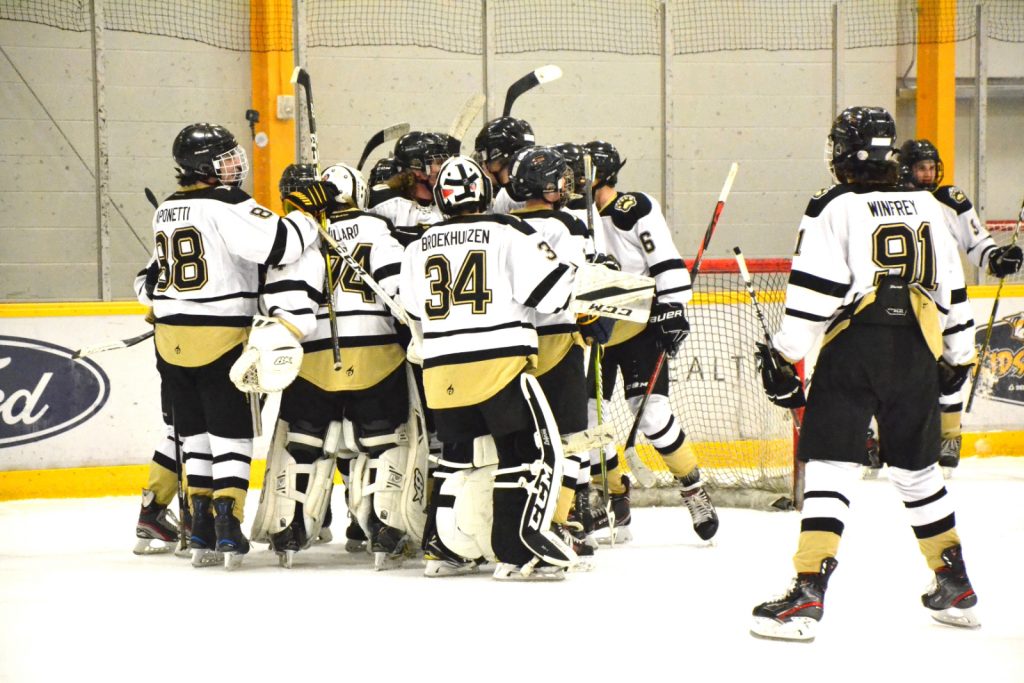